We stopped for only one night in Split as the weather was unbearably hot. Most of us had already visited the city and didn’t want to stay any longer than was necessary. We did some washing, stocked up on food and water, and had a crew change – two off and two on.

We planned to sail around the Dalmatian islands between Split and Dubrovnik. While in Split we met an English couple who have been sailing the Mediterranean for ten years. They now sail exclusively in Croatia as they love the island life, so were the perfect people to help us plan our route. We sat together on our boat with the charts and a notebook and learned about the best places to visit, to eat, and to moor.

Our first night was spent on Brac, in a small bay at the south west corner of the island. The bay had four restaurants and many mooring buoys. As we sailed in, a man in dinghy motored across to us and invited us to hook up to one of his mooring buoys. We'd heard this is common practice and that the price would be to eat at his restaurant. In this case though the price was 450 kunas ($90) AND we would be eating in his restaurant.  A bit cheeky we thought, so sailed over to the other side of the bay to try our luck there.  The deal was similar but a little less expensive at 300 kunas. These people really know how to sting the sailors! For obvious reasons we took the second option and had a nice, although relatively expensive dinner that night.

On the second night we moored at Stari Grad on the island of Hvar. The town is at the end of a long narrow bay and as we sailed in we were immediately struck by its charm. Stari Grad (literally meaning Old Town) is said to be one of the oldest towns in Europe. A walk around the town for lunch and supplies revealed an ancient centre, with a beautiful old square dominated by a church steeple.

We spent the rest of the afternoon on Izabela swimming, sleeping and watching the boat traffic go by.  There were enormous luxury cruisers, catamarans, tourist boats, small fishing boats, power boats. Every type of sailing vessel you could imagine. Later we went back across to town for dinner in a small square in the old section. As we ambled along the water's edge to our restaurant, we checked out the many luxury boats moored at the marina. It felt a bit like we were at a boat show.

On our third day we sailed further south to the island of Korcula and anchored in a bay at the west end. Generally, an anchor is free but again we were met and asked to pay a small fee (around $20) for the privilege.  It was a beautiful bay with only one restaurant, where we enjoyed a nice inexpensive meal and a gorgeous sunset view. 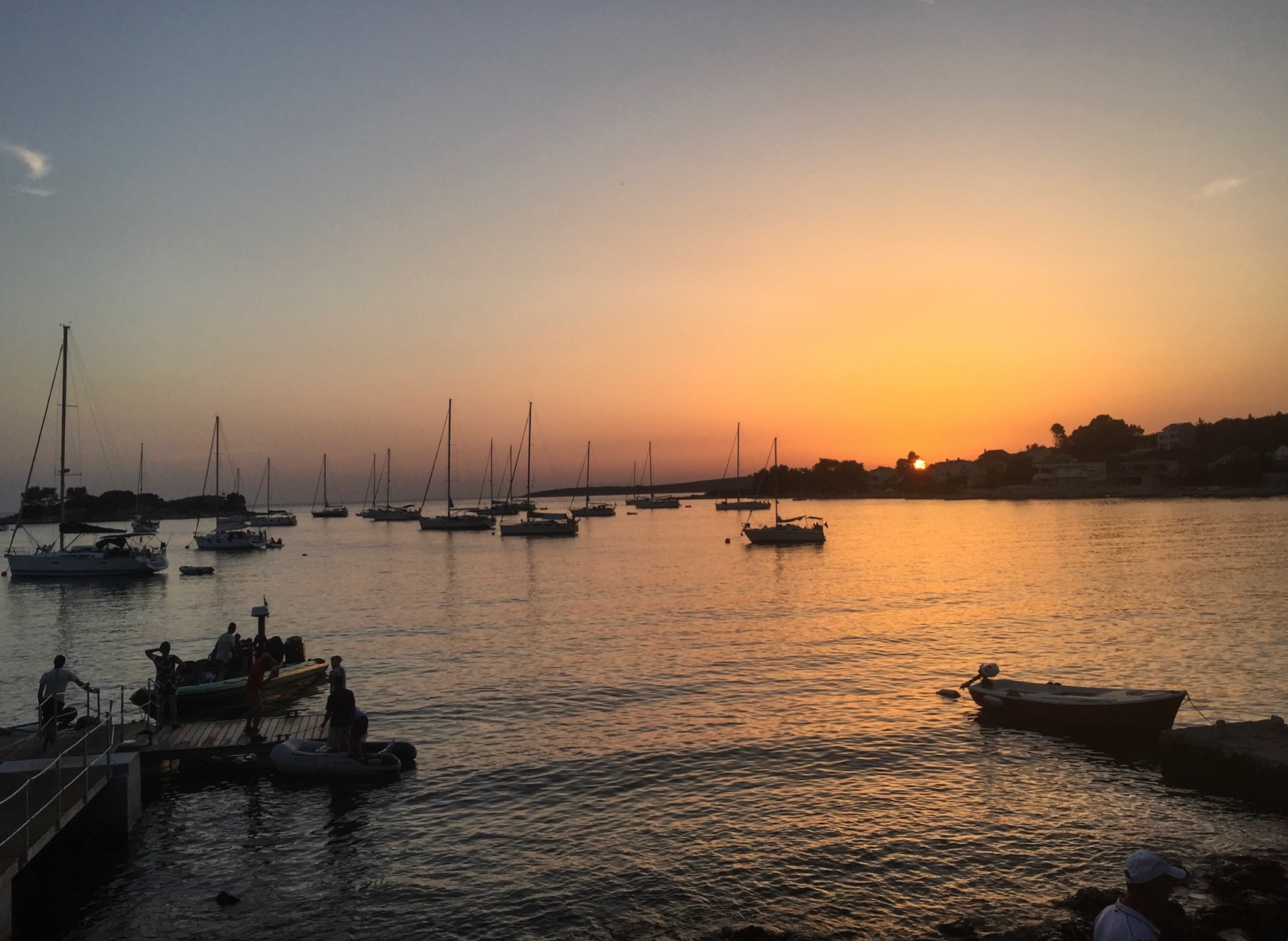 Croatia is experiencing an unusually hot summer with temperatures in the high 30s, so we enjoyed being out on the water where you can catch the breeze and swim off the back of the boat.

The next morning we sailed to the east end of the island to the town of Korcula. Sailing towards the town was an entertaining experience. There is a long peninsula to the north of the island that juts out from mainland Croatia. As we sailed between the two, paragliders criss-crossed around the boat, wind surfers swept along beside us, and huge cruisers, power boats and fishing vessels motored past us. Sailing into the town, we were again blown away by its beauty, particularly with the backdrop of the rocky hills to the north.

We berthed in the marina, and headed into the old section of the town. We ran into some young Aussies who had just climbed to the top of the old church bell tower and recommended we do the same. Up we went, paying the 25 kuna ($5) charge along the way and enjoyed a spectacular view of the town and surrounds.  The town was pumping as we walked around, stopping for a drink at one of the many waterfront bars.

We discovered an Asian restaurant and decided this was where we must eat.  The menu looke really interesting and similar to the fresh Asian style food we all enjoy back in Melbourne and have missed.  Unfortunately everyone else had discovered it too and there was no chance of getting a table.  They did however do takeaway, so we ordered just about everything on the menu and took it back to the boat to enjoy with a few more bottles of local wine.  The food was amazingly good and reminded me of how lucky we are to be able to enjoy this food every day at home. I loved Korcula and will definitely visit again one day when the weather is a little cooler.

Our next and final stop was the island of Mljet. We'd planned to spend one night in a protected bay at the west end of the island near the town of Polace and then sail down to the east end of the island for our final night.  I'm not sure if it was the oppressive heat, or the fact that we liked our beautiful location so much, but we stayed an extra night.  This tiny town runs along the water front with a beautiful Roman ruin at one end. We took a stroll and then caught a bus over the hill to an inland sea known as the 'big lake', before taking a small ferry boat across to an island in the middle of the lake, and swam some more.

That night we ate a traditional peka dish at a restaurant in Polace. We'd seen the peka advertised at many places throughout our travels and were keen to try it before leaving Croatia. A peka is a large metal baking dish with a bell-shaped dome lid. Vegetables (mainly potatoes) and pieces of meat or fish are placed in the dish and then drizzled with olive oil and herbs, and slow-cooked in an open fireplace with hot coals placed on top of the dome. Needless to say, it was delicious.

We're now in Dubrovnik at the end of our island hop. I'll be writing more about this amazing city in my next post.

One thought on “Island hopping”