We’ve just completed a six-day circumnavigation of the island of Zakynthos, starting and ending at Nikolaos Bay.

A week ago we sailed from Ithaca to Kefalonia intending to stay for quite a few days, but after only one night it became obvious that the strong north-westerly winds were again going to cause us some grief. So after reviewing the weather forecast and a map we decided instead to sail to the north east coast of Zakynthos and find better protection.

Zakynthos is the southernmost of the Ionian Islands and reported to be the greenest of all Greek Islands. The mountains around the coastline enclose a fertile plain planted with figs, olives, oranges, lemons and currant grapes.

The two-hour crossing from Kefalonia to Zakynthos was rough so we were a little relieved to arrive at Nikolaos Bay, at the north east corner of the island. As we motored in we spotted a long concrete pier on which we could berth. On the pier were two young men in bright blue polo shirts who helped us secure the boat. One of them introduced himself as Kostas and delivered a well-rehearsed speech about the different services his family provided in the town. He finished by handing us his card, pointing to a restaurant across the bay and telling us that we’d receive a 15 per cent discount if we were to eat there. He then jumped on his motor scooter and took off. Fifteen minutes later when another boat sailed into the bay and he was back to deliver the same spiel.

Nikolaos Bay is very pretty and had everything we needed – a small supermarket, tavernas, two beaches and good protection from the wind. It was the perfect place to berth for the next few days until the weather improved.

We were relaxing below deck when we heard what sounded like a lawnmower in need of a good service approaching our boat, followed by an insistent beeping horn. We went upstairs to find an odd-looking home-made tractor and trailer and the beaming face of another local entrepreneur, although this one was quite a bit older than Kostas. He was selling produce from his farm – currants, honey, lemons, dried herbs, olive oil, tomatoes and bread. Backpackers from a nearby hotel also wandered over to check out what he had to offer. We happily bought some of his goods before he moved on to the next boat.

That night we ate at Kostas’s family restaurant. The evening was very warm and we sat at a table on the beach right at the water’s edge and enjoyed the very good food. On our way back to the boat we met Kostas, who asked whether we’d had a nice meal and if we had everything we needed. We asked about the blue caves to the north of Nikolaos Bay and enquired how we might get there. We were not surprised to hear that he also runs boat tours and would give us a discounted rate.

I’ve visited a number of blue caves on my travels and each one is reported by the locals to be the best in Europe, so I was a little skeptical when I read in our yacht guide book that Zakynthos’s caves rival the blue grotto on Capri. The caves start immediately north of Nikolaos Bay and run all the way to the top of the island. They were indeed worth seeing and I was pleased we made the effort.

After two nights in Nikolaos Bay, the wind had eased and we decided to head south to the island’s main town, also called Zakynthos. It was only about an hour away and an easy sail. The town’s harbour is massive and has many very large yellow ferries coming and going throughout the day and night. The large town square that fronts the water was virtually empty during the heat of the day but in the evening was teeming with locals strolling, talking, playing or eating at the various tavernas that surrounded it.

On a hill high above the town are the ruins of a castle which we decided to visit. As it was extremely hot we took a taxi to the site and enjoyed a walk through the cool, shady pine forest that surrounds the ruins and the pretty town nearby. We also had a stunning view of the city and the harbour below. Later we took a tour of the town on a small tourist train and learned about the devastation caused by the 1953 earthquake which wiped out ninety per cent of the town’s buildings. The island has a very Italian feel to it, due mostly to the Venetian architectural design of the buildings, which is most evident in Zakynthos town. An attempt to restore the town to its former glory following the earthquake has unfortunately fallen a little short of the mark, but the town is still very charming. The tour was run by a Greek-Australian woman from Wagga Wagga and her husband. She had a very distinctive Greek-Aussie accent even though she’d been in Zakynthos for 35 years. 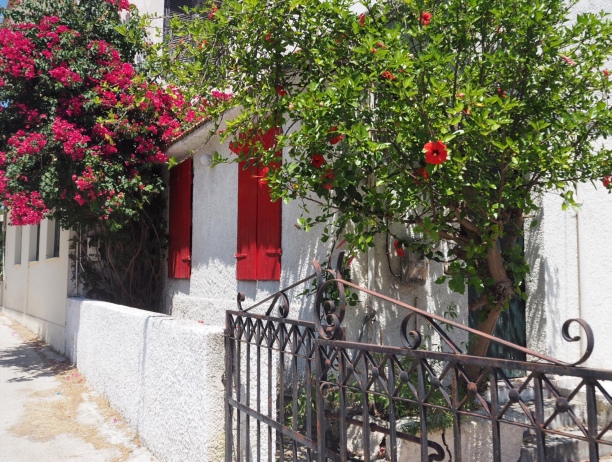 We reluctantly raised anchor after two nights in Zakynthos town and headed further south to Laganas Bay at the very bottom of the island. The wide bay is also a marine national park to protect the ‘world famous’ Caretta sea-turtle. During July and August the female turtles come ashore to bury their eggs about 50cm under the sand. The warm sand causes the eggs to hatch and the baby turtles emerge eight weeks later, immediately heading to the sea. No boats are allowed in the eastern part of the bay and people are not permitted on the beach after sunset. You can however see the turtles in their natural environment during the day from one of the many glass-bottomed boat tours that were available from the town of Keri at the west end of the bay. This was near to where we’d anchored so we thought we’d check them out the following day.

My cabin is in the bow (front) of the boat and I have a large hatch above my bed which I leave open every night as I enjoy the fresh air and a view of the stars. The next morning I woke to rain on my face. It was a very welcome change! We decided to skip the turtle tour and take advantage of the cooler and calmer weather conditions and head up the west side of the island to Vromi Bay, about half way along the west side of the island. Despite the relatively calm weather the sea was quite choppy and so we had a very rough sail. However the huge white cliffs facing the sea were a magnificent sight and made the rough journey well worth enduring. When we arrived to Vromi Bay we found there was very little room for a boat of our size so decided to continue along the west coast and head around the top of the island and back to Nikolaos Bay. 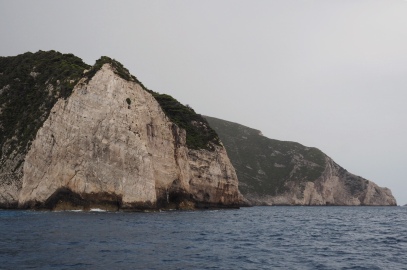 But we had one more stop to make – Navagio Beach, aka Shipwreck Beach. The beach sits at the end of a small bay surrounded by massive white cliffs and can only be accessed by boat. Lying on the beach is the rusty wreck of MV Panayiotis which has been there since 1980. It was an amazing sight. 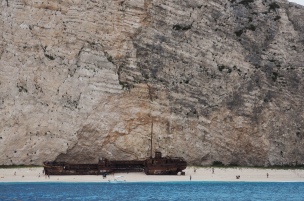 We spent our last night on Zakynthos back in Nikolaos Bay which felt a bit like returning home. Yesterday we made the crossing to Kefalonia where we’ll spend the final week of this journey.