We are staying at Megalochori on the Greek island of Santorini, not far from the island’s capital of Thira. Our house is located near the island’s main road so we catch a bus anywhere we need to go. We have a balcony overlooking the town and a rooftop with 360 degree views of the surrounding vineyards and market gardens. 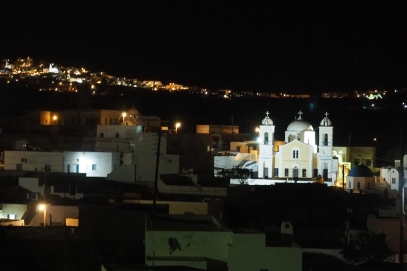 Megalochori is the oldest village on Santorini and very charming. Each night we take a short stroll down to the square, past the beautiful Cycladic white and cream homes with their colourful, rustic doors. We choose one of the restaurants in the square and watch the locals (and odd tourist like us) enjoying the warmth of the evening and the chance to relax and socialise with friends and family. The food is good and reasonably priced and the wine comes from the vineyards that surround the town. 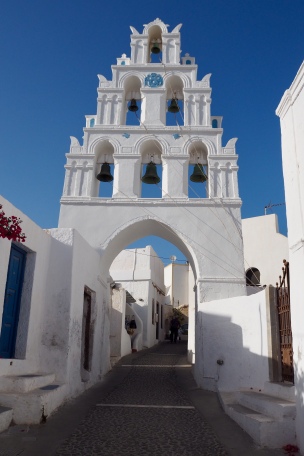 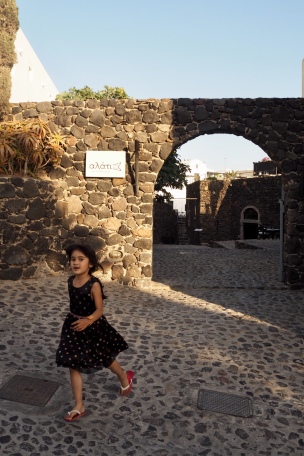 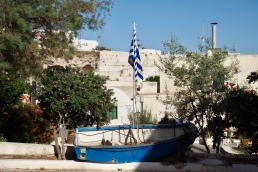 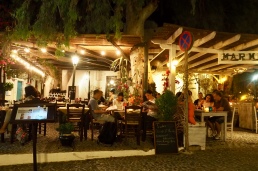 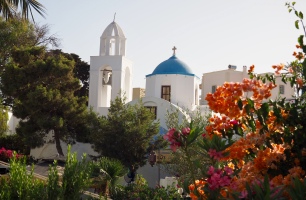 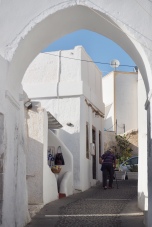 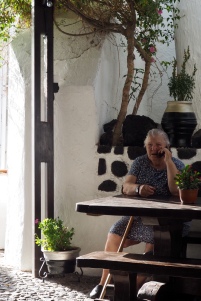 We’ve taken the bus to Thira a few times for shopping and sightseeing. We enjoyed strolling around the shops and admiring the stunning views of the water but couldn’t wait to return ‘home’ to Megalochori and its relative peace and quiet. 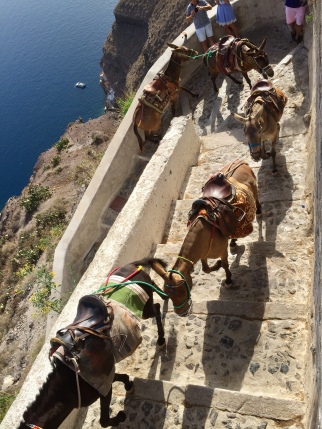 Santorini is the number one Greek Island for tourists, attracting a massive 5.5 million overnight stays last year. As a result traffic jams and overcrowding has become a huge issue for locals and tourists. Most people stay in Thira and Oia, which is located at the west end of the island and famous for its spectacular sunset views.

A few days ago we took a bus to the beach. We were dropped off at the water’s edge but there was no beach in sight. We heard a voice calling ‘red beach, white beach, black beach’. It came from a water taxi skipper who told us he would take us to any of these beaches. When we arrived at the red beach he told us not to get off as rocks fall from the cliffs on to the beach. Regardless, it was crowded with people who either didn’t know about the falling rocks or just didn’t care. The white beach was nice but very small and so the black beach was our choice. We stepped off the boat straight into the shallow water close to shore and then hobbled across the large pebbles and rocks to ‘the beach’.

After enjoying lunch and a drink in a bar overlooking the water, we paid five euro each for a beach chair and settled in for a relaxing afternoon of reading and snoozing. We were also entertained by our deckchair neighbours attempting to cross the rocks for a swim and by one of the water taxi skippers arguing long and loud with the beach ‘boss’. It was in Greek so have no idea what they were shouting about but it amused us all nonetheless. As the temperature increased we decided it was our turn to tackle the rocks for a swim. Once was enough! 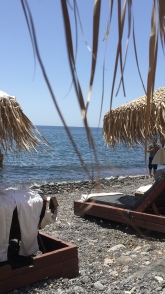 The next day we went on a five hour catamaran tour along the entire southern coast of the island. As we sailed past the black beach we were told by the skipper that it was the best beach on the island. Go figure! I’ll take a white sandy beach any day – although I do like the European way of hiring a deck chair and umbrella and having a waiter bring you drinks and food.

Tomorrow we leave Santorini for Rhodes. I’ll miss our little village of Megalochori but am looking forward to more Greek Island adventures.