Our week in the picturesque Vézère Valley was relaxing, fun and very educational. Each day we toured the countryside, visiting the many small towns and sites of interest. What I did not know before coming here is that this region is sometimes referred to as the ‘cradle of European civilisation’ or the ‘valley of mankind’. The area has some very significant and quite famous prehistoric sites including the Lascaux cave and La Roque St Christophe, two of the many places we visited to learn more about the fascinating history of this region.

In 1940, the Lascaux cave was discovered by a young man while out walking his dog in the forest. The dog fell down a hole and his owner along with three friends entered the hole to discover a series of caves. The interior walls and ceiling of the caves were painted with over 2,000 depictions of mostly large animals from that era – predominantly stags, horses and bison. The paintings in black, brown, red and yellow are the combined effort of many generations, believed to have been created around 17,000 years ago.

The cave was opened to the public in 1948, but by 1955 contaminants produced by 1,200 visitors per day were clearly damaging the paintings. As a result, the cave was closed in 1963, the paintings restored to their original state and a monitoring system introduced. An exact replica of the entire cave and paintings was recently opened not far from the original location. I was a bit half-hearted about it all before visiting. After all, our own Australian indigenous people were creating cave art well before that period and the ‘valley of mankind’ claim seemed a bit of an exaggeration. But the number of paintings and different colours that were used make it a pretty impressive sight and a must-see if you’re visiting the area. We weren’t allowed to take photos in the cave but if you go into Google images and type Lascaux cave paintings you’ll see what I mean.

Another must-see and not far from our local village of Le Moustier was La Roque Saint Christophe, an immense limestone wall 80m high and 1km long, that was occupied by humans 55,000 years ago. It was also the location of a small town in medieval times and you can see evidence of a kitchen, a church, and a sophisticated pulley system to carry goods up and down from the base of the rock. Its strategic placement high above the river meant that the villagers could easily see enemies approaching. They also had a sophisticated communications system whereby a horn blown into a hole in the rock would be heard from the next village and passed on further down the line to warn of advancing danger.

Many of the nearby villages are in pristine condition and so very beautiful. Saint Leon sur Vezere, Fleurac, Montagnac and Les Eyzies are just a few that we visited and explored while meandering around the valley.

Tomorrow I depart for Greece where I will be joining friends in Preveza to get our boat ready to sail the Ionian Islands over the next five weeks. I’ve loved every minute of my time in France but am very much looking forward to being back on the water. 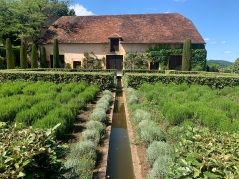 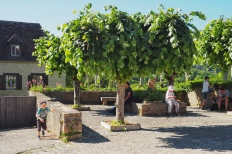