After six days of cleaning, servicing and stocking our boat we’re finally back on the water. Our yacht, Izabela has been sitting in a boat-yard in Preveza, Greece for nearly two years as we were unable to sail in 2018, so she was in need of a very good dose of TLC. On 12 June she was lifted into the water by an enormous crane and we spent our remaining time at Cleopatra Marina preparing to sail and waiting for our remaining crew to arrive.

On our first night in the marina I woke to very loud splashing noises and got up to investigate. Between the stern and pier were hundreds of sardines thrashing and jumping about in the water trying to catch the bugs that were swarming around the lights along the pier. Each morning we woke to find around fifty sardines lying on the pier but the seagulls soon arrived to clean them up, squawking loudly and fighting with each other over their catch.

Preveza is on the north west coast of Greece and a bustling town of around 10,000 people. It is a popular stop for sailors who berth at one of the marinas or along the town quay. It is also a significant historical site. Just outside the town is the ruins of the ancient city of Nicopolis, built by Augustus to commemorate his defeat of Mark Antony and queen Cleopatra of Egypt in 31BC.

Preveza has a really lovely atmosphere. Every evening the old historical centre of town fills with townsfolk and sailors, strolling around the streets, calling into the shops that stay open until 10.30pm or stopping to chat to friends. Eventually everyone settles into one of the many tavernas for dinner and to talk and eat until late into the night. The food is fresh, tasty and inexpensive. The local wine is basic but very drinkable and around eight euros per litre. Dinner is normally a Greek Salad, some crusty fresh bread, sardines or a local meat dish, and a half litre of Rose to share. That’s pretty hard to beat, as far as I’m concerned!

We will spend the next five weeks sailing the Ionian Islands, starting with Paxos and Corfu before heading south to Lefkada and Kefalonia. My next post will be from the beautiful port of Gaios on the island of Paxos. 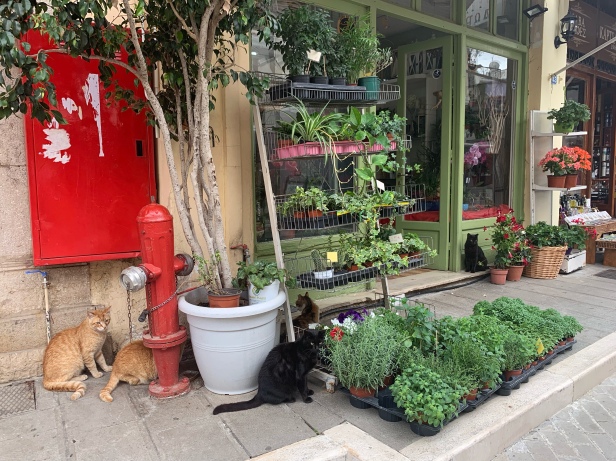