We have settled happily back into yachting life. Our first five days on the island of Paxos has been everything we’d hoped for, and more.

It took us around five hours to motor-sail from Preveza to the port of Gaios on the island of Paxos. Our yachting guidebook had prepared us for the very busy and narrow entry to the town. The Ionian Islands are a popular sailing destination and it’s not unusual to see a flotilla of five or more yachts motoring into a port. Once we reached the town we reversed in to the town quay, not always an easy task when negotiating for space with ferries, catamarans, motor cruisers and other keel boats. The town is beautiful with the well-kept buildings that front the water painted in various pastel colours. The town square surrounding the small pink Orthodox church is filled with tables and chairs for the various restaurants and cafes that occupy its perimeter. As we settled into our berth we chatted with our neighbours to find out how the power and water supplies work, as they vary from town to town. We also asked if there were showers and a laundry, always a priority for yachties in need of a decent hot shower and clean clothes. Yachting is very much like camping on water.

Each yacht flies the flag of its owner’s country and it is also customary to fly the flag of the country in which you are sailing. A scan of boats in any Ionian Sea port will reveal mostly French, German, Italian, English and Australian flags. Most people can speak basic English so it is the common language of the yachting community and used to negotiate crossed anchors, departure times, the best place to eat, shop, etc.

We spent our first evening exploring the town and finding the shops we needed. We found a shower for three euro at the local gym but no laundry facilities. The first evening was cool and beautiful and the town square was filled with local families and yachties drinking and dining. There seemed to be a hundred children playing around the edge of the square in their small groups while their parents socialised at one of the many tables. They continued well into the night and we all commented on how late the children were up wondering how they would get up for school tomorrow. 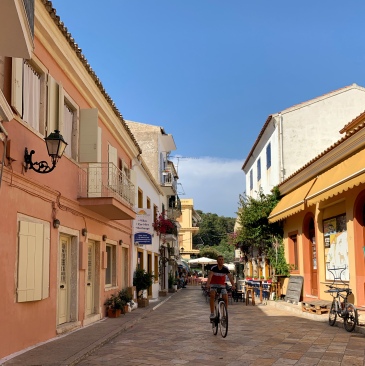 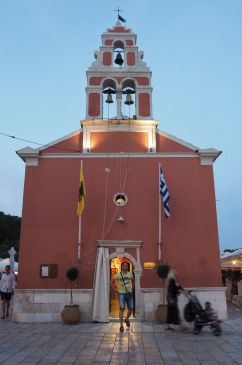 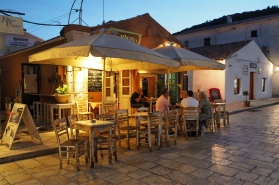 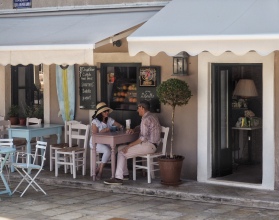 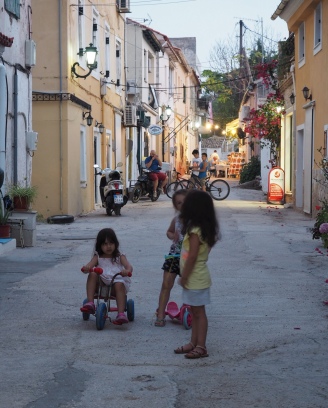 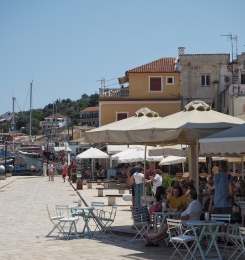 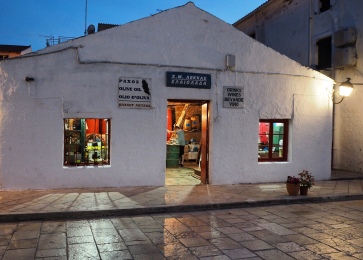 A typical evening in Gaios

The next morning one of our crew went for an early walk and discovered a hotel on the edge of town with a beach and a sign saying ‘Visitors Welcome’. This was all the encouragement we needed and we spent a lazy day swimming, reading and sleeping on their beach chairs under the shade of the huge umbrellas. 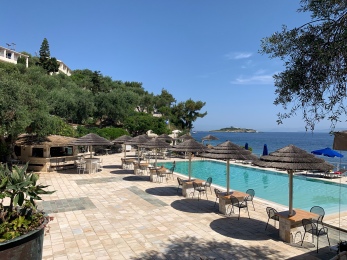 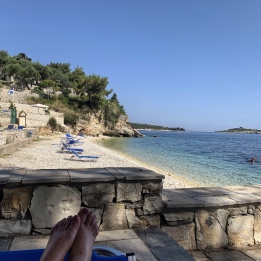 We liked Gaios so much we decided to spend an extra night and booked a small motor boat for the following day so we could explore the island’s coastline as well as Anti Paxos, a smaller island to the south. Paxos was once famous for its olive oil and the island is still covered with olive trees. The coastline to the west is rugged with beautiful white chalky cliffs, interspersed with tiny beaches and caves. The water is very blue and so clear we could see right to the bottom. We stopped at a port to the north of Gaios called Longos and had a very tasty fish lunch. One of our crew had the fish lasagne and declared it one of the nicest meals he’d ever eaten. We all vowed to stop there on our way back from Corfu. 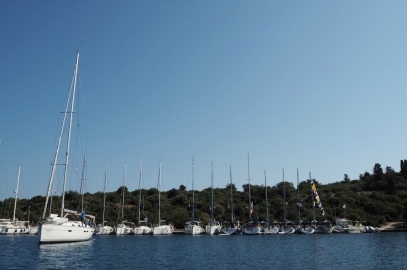 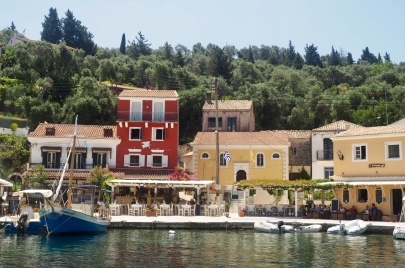 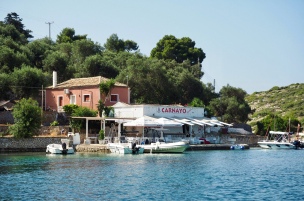 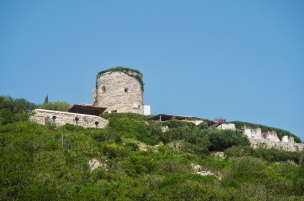 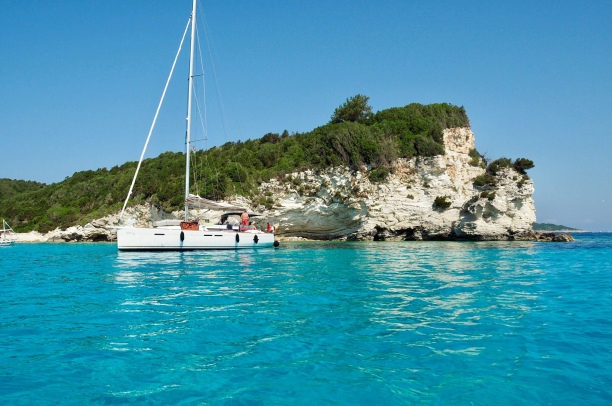 Some sailing friends from Melbourne arrived that afternoon as part of a flotilla so we met them and the rest of their party for dinner at a restaurant in town, catching up on news from home and sharing stories of our journeys so far.

After three nights we lifted anchor and left Gaios for the short sail to Lakka Bay, located on the very north of Paxos. The bay is a popular destination for yachts so we were pleased to arrive early enough to secure a good spot. It was another hot day so as soon as we were securely anchored we changed into our bathers and jumped from the boat into the beautiful blue, cool, clear water. We spent the remainder of the day swimming and relaxing on Izabela, watching the different boats coming and going from the bay.

By nightfall there were around sixty yacht in the bay. We took the dinghy across to town to explore and to eat. Lakka is small and very pretty, with flowers adorning the shops and a number of small town squares where everyone meets for drinks and dinner. 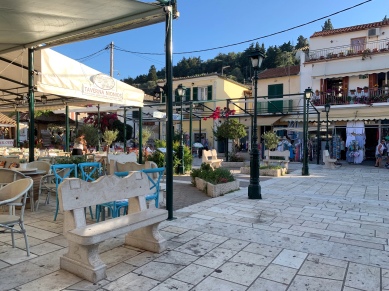 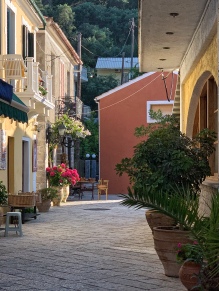 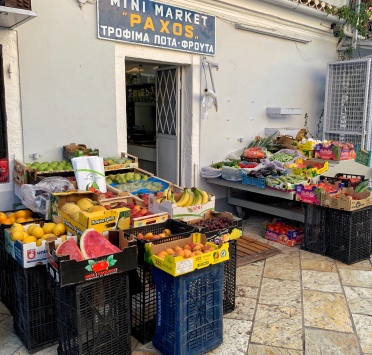 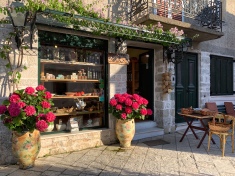 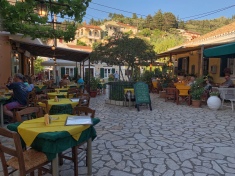 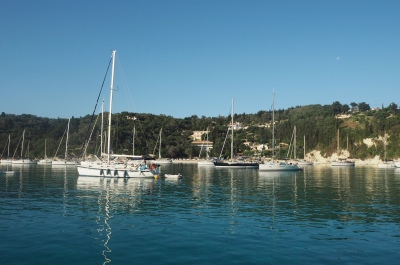 The view from our boat on Lakka Bay 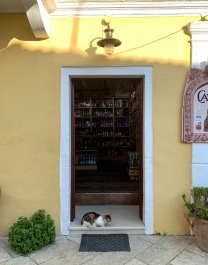 We will spend one more night in Lakka Bay before crossing to Corfu, where I will write my next post.